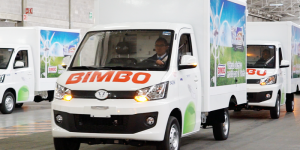 Grupo Bimbo, a bakery corporation from Mexico City, has integrated 100 electric trucks into its delivery fleet. But this is only the first step: a total of 4,000 more are to follow by the end of 2024 – 1,000 each year. They were developed by a subsidiary of the company.

According to its own information, Grupo Bimbo has been working on the project since 2012 and has invested a total of 146 million dollars in its electric truck initiative. The fact that it develops and manufactures electric delivery vehicles that are suitable for itself as a company from outside the industry is certainly reminiscent of the StreetScooter story with Deutsche Post. The electric trucks have not only been developed by subsidiary Moldex, but are now also being manufactured by the company in a suburb of Mexico City.

Meanwhile, technical data on the vehicles are not mentioned. It is only said that they have lithium batteries on board, can be operated for six to eight hours without a charging stop and are charged with electricity at the Group’s own Piedra Larga wind farm in Oaxaca.

With the initial 100 new electric trucks, the Group now has around 500 electrically powered trucks that will be used in Mexico City, Guadalajara and Monterrey. In addition, the company has also purchased 41 hybrid vehicles from Toyota for around 700,000 dollars.

Only a few of us are probably familiar with Grupo Bimbo. The baking company is active primarily in North, Central and South America and in Asia. According to its own information, the Mexican group has more than 100 locations in 17 countries. In several countries – including Mexico – the group is considered the largest food producer.