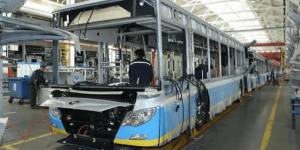 Electric buses and electric cars are to be produced in Egypt in the future. The Egyptian government has now reportedly reached agreements with Foton and Geely respectively.

According to media reports, a cooperation between the government and the Chinese manufacturer Foton provides for the production of 500 electric buses per year in Egypt over a period of four years – a total of 2,000 vehicles. There is also an option to increase this number to 5,000 electric buses at a later date.

As of next November, the electric buses are to be built in factories that were initially intended for military production, as the responsible minister Mohamed al-Assar announced. In addition, the ministry has founded a company for charging stations. According to al-Assar, there are already contracts for the construction of charging stations and the operation of the electric buses in several cities, but he did not give any details.

According to al-Assar, the government has also concluded an agreement with Geely for the production of electric cars in Egypt but did not give further details. Egyptian media reports quote al-Assar about the deal, but do not include statements from the two Chinese companies.

Egypt’s President Abdel Fattah al-Sisi also stated that an announcement of a “comprehensive vision for the automobile and electric car industry”, which is currently still being worked on, would follow as soon as “we reach an advanced level.” The declared aim is to build a local electric vehicle and battery industry with the help of Chinese companies.

Update 12 July 2020: Egypt is increasing its efforts to settle Chinese companies. The country’s oldest automotive manufacturing company El Nasr has signed a deal with China’s Dongfeng Motor to produce electric cars for the first time in Egypt. According to the agreement with the Chinese automaker, El Nasr will produce 25,000 electric vehicles annually. Egyptian Minister of Public Enterprise Sector Hisham Tawfik considers the deal a comeback for El Nasr, which has been closed since 2009.