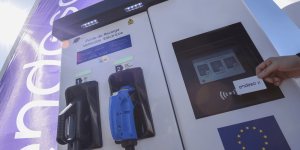 Gasexpress has been operating automated filling stations since 2014. The company’s network comprises a good 40 locations, which means that under the new agreement almost all service stations will be equipped with charging infrastructure. According to Endesa, the geographical distribution will be concentrated in the cities or regions of Aragon, Valencia, Castilla La Mancha, Madrid, Murcia and Castilla y León.

The charging stations, which run entirely on green electricity, are accessible via the app called Juice Pass from the Endesa X division. Billing can be done via this application or by credit card. However, registering with the app brings customers a number of advantages, Endesa advertises. Among other things, there are discounts on the charging price. In principle, however, the charging infrastructure should be open to all electric car drivers, whether registered or not.

“Thanks to this agreement with Gasexpress, we continue to demonstrate with actions that we are on the right track in our goal of ensuring that any driver, wherever they are, will be able to travel freely throughout the entire country in an electric vehicle before the end of this year,” says Josep Trabado, head of Endesa X. The agreement with Gasexpress is a further step towards this goal.

Endesa had already published a roadmap at the end of 2018, according to which a total of 8,500 new public charging points are to be created throughout Spain by the end of 2023. The company, which is majority-owned by the Italian energy group Enel, is now at least partially confirming this roadmap: In total, the company plans to install more than 36,000 charging points, 8,500 of which will be in the public sector and 27,500 in the private sector (in 2018 there was still talk of 100,000 charging points on residential and corporate properties). According to Endesa, the corresponding investment volume amounts to 65 million euros.

So far, through cooperation with various partners, around 1,500 charging points are already in operation or in the installation or concrete planning phase throughout Spain. In total, the first phase of the shop network expansion, which will run until the end of the year, plans to install 2,000 stations in important cities with over 35,000 inhabitants. Over a total span of 15,000 kilometres, main roads and cities will be equipped with charging stations, so that 75 per cent of the Spanish population will have access to public charging stations within a radius of 100 km.

Between 2021 and 2023, a further 6,500 public charging stations will follow at strategic junctions to densify the network – both on the mainland and on the islands belonging to Spain.