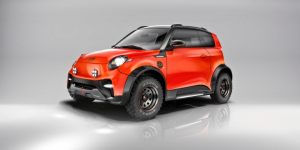 With the Life Concept Cross, the company itself refers to a CUV – a City Utility Vehicle. The basic body concept of the e.GO Life remains the same, but the dimensions have changed due to larger tyres, changes to the chassis and some add-on parts. The concept car is 1.66 metres high, 1.82 metres wide and 3.41 metres long – around seven centimetres more than the familiar production model.

There is also some new data on the technology: The Life Concept Cross’s electric motor has an output of 72 kW instead of 60 kW, and it is to be fitted with “a larger battery than the e.GO Life 60,” but e.GO does not provide any precise data. Pre-orders for the 1,280-kilogram four-seater will be accepted from the premiere in Geneva, according to e.GO Mobile.


In addition, the e.GO Life Sport concept presented in Geneva in 2019 has also been further developed. This year, the German startup wants to show a “near-series version” of the vehicle. e.GO Mobile has now provided the performance data with an 80 kW engine, a sporty chassis, 17-inch aluminium rims and sports seats. Sport is also to be given a “larger battery”, but have not given any more details in this regard. As with the Concept Cross, advance orders should be possible in Geneva, but e.GO does not quote a price for either model.

“Our customers are enthusiastic about the design of the e.GO Life,” says company founder Günther Schuh. “They want more attractive derivatives of our e.GO Life that say something about the buyer and user. With the vehicle platform developed especially for Life, the strengths can now be exploited and emotional special models can be launched on the market with “little effort”.

However, even the low cost of a special production must first be financed – advance orders with a down payment could, of course, help here. Money has been a major issue for e.GO over the past few months. In October 2019, investors had to inject 100 million euros to avert insolvency. In the meantime, Schuh is also looking for the future of his company in China: A Chinese version of the e.GO Life is to be built there in a joint venture with a still unknown company. In Germany, however, the planned deliveries of the First Edition have been repeatedly delayed.