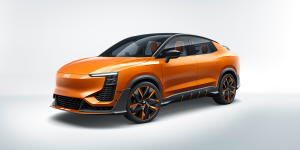 Chinese electric car startup Aiways has presented the U6ion – a near-series concept of what will be the company’s second model. The crossover coupé is based on the same platform as the U5 electric SUV but is distinctly different in appearance – with a few curious details.

Both the U5 and the later production model of the U6ion use the MAS platform (More Adaptable Structure) from Aiways. This allows for a number of different drive and battery options and vehicle configurations “to meet customers with different usage requirements and aesthetic preferences,” the company stated in a press release.

The study looks slightly more dynamic than the U5, not only because of the different body shape, but also because of the “powerful lines” and “muscular details”, as the PR text says. Among other things, the LED headlights and taillights are a different, narrower design and other details are aerodynamically optimised, such as the rear wheel arches. Aiways gives the study’s cW value of 0.27. The permanently mounted rear spoiler at the end of the roof arch is also striking.

With the interior, the designers were guided by well-known Japanese industrial designer Ken Okuyama, and have tried to emphasise the sportiness of the study. The sports steering wheel in an unusual rectangular basic shape is open at the top, as in some racing cars, and the doors are not opened by means of handles but by lighter loops – another detail from motorsport. The large lever on the centre console for selecting the speed settings was inspired by the throttle lever on racing yachts.

As in the U5, Aiways has installed a “small robot” on the dashboard, which is intended to serve as a visible interface between the occupants and the AI-based voice assistant. While such a function may certainly meet with greater approval, two further details of the study show how much Aiways is targeting a specific group of passengers: The hidden storage compartment for an electric scooter in the boot for short-distance travel may seem quite sensible, but between the rear seats there is also a special shelf for drones and remote controls.

“The U6ion concept car reflects the attitude to life of young, environmentally conscious customers,” says Alexander Klose, Deputy Chairman of the Board of Management of Aiways and responsible for international business. “It continues the Aiways brand philosophy with its dynamic lines and details of strong character. With the later series version U6 we are addressing young people who cultivate a progressive lifestyle”.

Aiways has not released technical data of the concept car. With its older sister the U5, an electric motor on the front axle gives an output of 140 kW, the battery has an energy content of 63 kWh, which should be sufficient for a standard range of 503km in the outdated NEDC, and over 400km according to WLTP.

The startup founded in 2017 has not revealed when the U6 will be launched as a series version. The U5 originally planned to start in Europe from April 2020, is now scheduled to arrive in August 2020. In Germany, Aiways wants to sell its electric cars without using classic car dealers; direct sales will be handled by the electronics discounter Euronics.