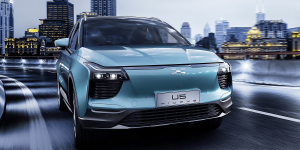 The Chinese electric car startup Aiways has produced the first examples of its U5 model for the European market at its Shangrao plant. The official market launch of the Aiways U5 in Europe is scheduled for April 2020.

After the Aiways U5 received approval for Europe in September, the company is now taking a further important step towards the sales launch planned for five months with the start of production. The first units are to be delivered in China before the end of this month.

The electric vehicles manufactured under the European specification are to be used primarily for marketing purposes in Germany. “These vehicles will be presented to European media and potential customers at various marketing events across the continent and will allow visitors to see and experience the European version of the U5 before it becomes available next year,” said Samuel Fu, president and co-founder of Aiways, according to a company statement.

The U5 is an approximately 4.70 metre-long, 1.90 metre-wide and 1.73 metre-high battery-electric SUV, powered by a 140 kW electric drive on the front axle. The electric SUV has a torque of 315 Nm and a battery capacity of 63 kWh. It should be possible to travel 503km on one charge according to the outdated NEDC, and the WLTP range is measured at over 400km before having to recharge the U5. The electric vehicle from China has a target price of around 35,000 euros.

Aiways only just secured the production license in August of this year by taking over Jiangling Motors Holding’s production license. The plant (with an investment of 1.73 billion euros) was already under construction at the time and was erected in 14 months. The capacity is currently 150,000 vehicles per year, in a later expansion stage up to 300,000 vehicles should be possible. The factory consists of a stamping shop, a body shop, a paint shop, a battery packing station and an assembly hall.

Renault City KZ-E to come to Europe as Dacia