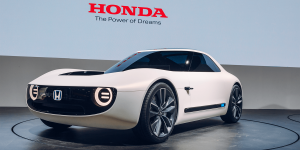 Honda’s European boss Tom Gardner apparently revealed the plans to Automotive News Europe. “The regulatory agenda in Europe is accelerating the move to low- and zero-emission technologies faster than anywhere in the world,” Gardner explained. Honda’s first electric model, the Honda e, will be delivered starting this summer. The manufacturer expects annual sales of around 10,000 units.

Although Gardner did reveal the details of the second electric model, an earlier report suggests that this is likely to be the production version of the Honda Sports EV Concept electric sports car that was presented at the end of 2017. The two-door sports coupe uses the same 113 kW drive and a 35.5 kWh battery as the four-door small electric car. The features of the small e-platform also include a relatively long wheelbase and short overhangs to make room for the battery.

In October 2019, Honda announced that it was accelerating its electrification plans for Europe. The second BEV is one of four new electrified models that Honda plans to introduce in Europe in 2021 and 2022. This includes a full hybrid version of the Civic, which is planned for 2021. It seems that Honda is also considering a plug-in hybrid version of the Civic, while the HR-V is expected to receive a full hybrid version. Honda could also import one of its hybrid models from Japan to Europe, such as the Accord Hybrid or the Clarity plug-in hybrid – Honda had already discontinued the Accord with combustion engines in Europe several years ago, and the Clarity was only available in limited numbers with fuel cell drive. Honda will also start selling the new Jazz in Europe this summer, which is available exclusively with a hybrid drive.