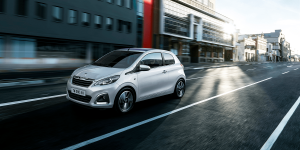 According to CEO Jean-Philippe Imparato, a few weeks ago Peugeot decided to keep making its small car model 108, and the executive added that Peugeot could then offer the 108 as a pure electric car – possibly with the technology of the new Fiat 500.

Here PSA could take advantage of the merger with Fiat Chrysler and equip the small electric Peugeot with drive technology from the new Fiat 500 Electric. Imparato has made it clear, however, that there will be no discussions about this kind of technology exchange until the merger is completed.

Microcars with internal combustion engines face an uncertain future due to increasingly stringent emission regulations. In some cases, the installation of more expensive exhaust gas after-treatment is not worthwhile in the price-sensitive segment – and even then, they would still burden the manufacturer’s CO2 fleet emissions. Some carmakers are therefore considering either phasing out their model series or, like the VW Group, switching to the e-drive with the Up and its sister models Seat Mii electric and Skoda Citigo e iV.

Peugeot has now decided in favour of the latter. “We decided some weeks ago that we will maintain the 108 in our line-up,” Imparato told the British magazine Auto Express. “Why? Because this car has reasonable success and because it’s important – in the UK we are selling around six thousand cars a year.” As to the future of the 108, he intimated: “If it was to be replaced one day, I don’t see any other solution than 100 per cent EV.”


The problem of fleet emissions was also intensively discussed in the Peugeot Executive Board. “Even if this segment isn’t completely aligned with the CO2 offensive we are doing, if the customer wants the car, for the moment, we will continue with the 108,” says Imparato. “At the moment we’re at a very positive CO2 level, and we don’t have to struggle in terms of CO2.”

Since the 108 is currently based on a different platform than its bigger brother 208, it cannot take over its e-drive (in an adapted form). Instead, the plan is to use the technology of the recently introduced electric Fiat 500 – 87 kW engine power, 42 kWh battery capacity for 320 km WLTP range. According to the Peugeot CEO, this is possible but is not currently being discussed internally for a good reason. “I’m not studying anything around the platforms of FCA – we’re in a period of merger of the operations, and at that time it’s forbidden to study anything during the merger,” says Imparato. “I’m happy to discuss after the closing of the deal.”

Only one thing seems to be clear: The next 108 is to be a fully-fledged microcar and not a reduced city vehicle like the Ami from PSA’s sister Citroën. While he seemed very enthusiastic about the model, saying, “It’s cool, isn’t it? Ami is not a car, it’s a device! For my colleagues in Citroen it’s the right way to go,” he also emphasized that: “We are sharing a common vision in terms of PSA group, but each brand is writing its own story.” He finally concretely said: “It’s not something for Peugeot on my plan.”

BMW halts plans for the iX3 in the USA