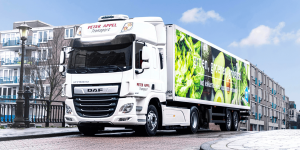 DAF Trucks has started to test the CF Hybrid in customer applications to gain experience in daily use. The Dutch transport company Peter Appel will be using two of these hybrid trucks to supply supermarkets in the Netherlands close to city centres.

The DAF CF Hybrid is equipped with a 10.8-litre diesel engine with 330 kW from Paccar, an electric motor from ZF with a continuous output of 75 kW (130 kW at peak), and a special ZF TraXon transmission for hybrid drives. The 85 kWh battery is supposed to provide an emission-free range of 30 to 50 kilometres, depending on the total train weight. According to DAF, this should enable the electric truck to drive purely electrically in the city, while the diesel engine should only run outside urban areas for longer distances.

The two vehicles at Peter Appel Transport will now be used to validate whether the ranges are sufficient for operation under real conditions and whether the fuel savings are as high as expected. The test operation is limited by a small but important detail: The battery of the two pre-series trucks cannot yet be charged by cable. The 85 kWh battery pack can only get its power from recuperation or being charged via the diesel motor. In the ideal case, the distribution trucks would, of course, start their daily shift with batteries fully charged overnight. DAF says that a plug-in version will be made available in later series production.

Despite this (temporary) limitation, the transport company is open to hybrid trucks. “While the electric trucks are ideal for urban distribution, the hybrid technology is preferable for longer routes. In town the DAF CF Hybrid operates fully electric, and the truck’s diesel engine means it can travel to and from the different distribution centres within the Netherlands and abroad without any problems,” says Marcel Pater, fleet manager at Peter Appel Transport.

In the longer term, the Dutch company is also looking at other options. Ron Borsboom, executive director of DAF Product Development says: “With a cleaner future in mind, for DAF there is no one single technological solution for the broad spectrum of transport requirements.” He summarizes “That’s why we are testing different technologies. Fully electric is a good alternative for urban distribution, clean diesel technology an excellent option for longer distances – partly due to new types of fuel – and for the long term we are having a closer look at hydrogen as well”. Hydrogen trucks (and buses) are indeed picking up on usage as vehicle makers see the potential for hydrogen fuel cell in long-distance and heavy-duty applications.

In this first round of tests, transportation company Peter Appel intends to supply two Albert Heijn stores. If the HEV-diesel hybrid trucks from DAF are convincing for Peter Appel Transport in the test operation, the scope for potential orders would be considerable: the transport company’s fleet consists of a total of 680 trucks.

In addition to the CF Hybrid, DAF also offers an electric truck unit, the CF Electric. The total towing weight is 37 tons, but at 100 kilometres the range is more limited than with the hybrid truck. There is also a class smaller the LF Electric than 19-tonne trucks for urban distribution transport. The modular design of the battery allows the capacity to be individually adjusted; a maximum of 222 kWh is possible for a range of 220 kilometres.