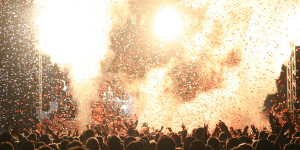 He suggested this on Twitter and put it to a vote, adding: “With an epic sound system & woofers the size of a car” to the bill.