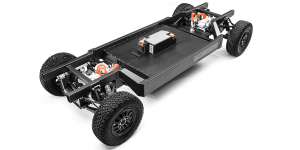 The US electric car start-up Bollinger Motors has now presented in detail the platform on which its first two models B1 and B2 are based. The goal: to offer the platform to other manufacturers in future.

The B1 as an off-road vehicle and the B2 as a pickup both share the same electric chassis – similar to the skateboard platform of companies like Rivian, which also build different models on it. With a ground clearance of more than 38 centimetres and robust construction, which is partially similar to the original Hummer of the US Army, the two models have been developed as real off-roaders.

According to CEO Robert Bollinger, the B1 meets the requirements of Class 3 for US commercial vehicles but is also undergoing homologation to US, CA, EU and ECE standards. “When we first built our Class 3 B1, we knew there was a commercial aspect to the platform,” says Bollinger. “Not only cab-on-chassis, but entirely new truck bodies can fit on our E-Chassis, and help propel the world to all-electric that much faster.”

A patent is currently pending for the E-Chassis, but this has not yet been granted. The technical data now published go beyond the 120 kWh for the battery mentioned above. This means that 180 kWh is also possible as an option, with four-wheel drive via two motors and off-road capabilities with reduction gears and limited-slip differentials. Bollinger states the maximum payload at 5,000 pounds or around 2,268 kilograms. The platform should be easily adaptable to different wheelbases, the chassis has hydropneumatic self-levelling suspension, hydraulic ABS and electronic traction and stability control. The AC on-board charger has an output of between 5 and 15 kW, while Bollinger states that the DC charging time is 75 minutes.

The electric chassis is also to be sold to third parties from 2021, who can then build their own vehicles on the platform. According to Bollinger, the partners will be able to buy the chassis directly or manufacture them themselves under licence. The catch: So far Bollinger does not name a price for the E-Chassis. This is probably because it also depends strongly on the respective configuration and order quantity. A quick recap: For the finished models B1 and B2, Bollinger demands a proud 125,000 dollars despite (or because of) the robust construction. That is over 50,000 dollars more than Rivian demands for its models.