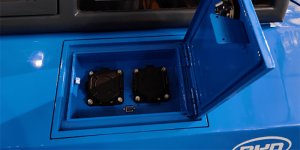 On the occasion of its tenth anniversary as a manufacturer of forklifts running on lithium iron phosphate batteries, BYD has presented an innovation in this field: Their new dual charging system. They are also launching the new generation of their PTP20P pallet truck.

First of all, the new dual charging system: initially available for the ECB50 counterbalance truck, it offers a second AC connection that doubles the charging speed. This means that both connections can be used simultaneously – each with 200 A. BYD does not comment on the maximum charging capacity.

“In environments where high productivity relies on maximum availability of the material handling fleet, such as high-throughput warehouses and cross-docking facilities, the BYD dual-charging system will ensure industry-leading levels of uptime,” promises BYD. The company describes itself as the only forklift truck manufacturer that develops and manufactures its own batteries. This ensures that technological advances are brought to market quickly, the Chinese manufacturer says.

BYD is also launching the second generation of the PTP20P pallet truck. The presentation of the model was actually planned for the LogiMAT 2020 trade fair in Stuttgart. Since this had to be cancelled, the company now presented the successor to the current PTP20P without a trade fair appearance. The pallet truck, which also has lithium iron phosphate batteries on board, has a travel speed of 12 km/h and a payload of 2,000 kilograms, the manufacturer announced.