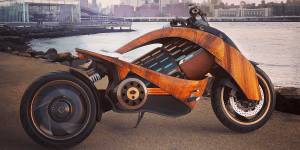 The French startup Newron Motors is exhibiting an extravagant electric motorcycle called EV-1, which is to be offered with wooden-looking frame elements, among other things. Initially, they plan a small series of twelve units, to be delivered from 2021.

Visually, the EV-1 electric motorbike is particularly striking because its battery is a central component of the chassis. Newron Motors speaks of a “structural battery” and an “exoskeleton chassis” concerning the cylindrical body of the machine. The electric motor also stands out – again embedded in a cylindrical shape – under the deeply mounted seat. The design is completed by functional frame elements, which the French want to offer in various surface finishes.

At the height of 2.22 m, a width of 0.8 m and a height of 1.0 m, the EV-1 weighs a total of 220 kilograms. The manufacturer puts the wheelbase at 1.60 m, while the seating position is just under 70 cm high. As far as the technical data are concerned, Newron Motors promises a compelling package: The EV-1’s electric motor is to produce 75 kW and develop a torque of 240 Nm. According to the manufacturer, acceleration from 0 to 100 km/h is achieved in less than three seconds. The top speed is electronically locked at 220 km/h. Newron states a range of 220 km, in city traffic 300 km should be possible. The battery can be quickly charged via CCS, according to the French website.

As the company announces, advance orders for the e-motorcycle are already being taken and require a deposit of 2,000 euros. Expect the EV-1 to sell for around 60,000 euros, including taxes, next year.