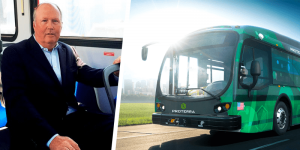 Jack Allen’s previous career was long spent at Navistar International, where he worked for over 30 years before joining Proterra in 2017. His previous experience as the Navistar CEO will serve him well in his plan to “guide Proterra’s continuing growth, including scaling operations, and supply chain and manufacturing capability.”

The former CEO warmly welcomed the appointment: “Only six years ago, the idea that transit could eliminate its dependency on fossil fuels was revolutionary,” said Ryan Popple, before adding: “I have worked with Jack for three years on our Board and I know that his leadership and experience is exactly what we need to continue meeting EV demand with a highly efficient manufacturing operation.”

Both executives say they are still actively working to mitigate the “challenges presented by the COVID-19 pandemic”, in which regard their focus lies with the “health and safety of Proterra’s employees while meeting the growing demand for electrified transit vehicles”.