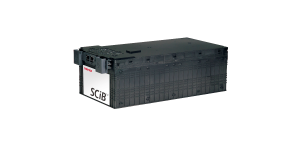 The certificate from ClassNK covers all twelve components of Toshiba’s battery system, also known as Super Charge Ion Battery, SCiB. Parts include the lithium-ion battery modules, current sensors, and the BMS, also known as the battery management unit (BMU). The latter is an integral part of the certification based on Class NK’s ‘Guidelines for Large-capacity Storage Batteries’ which requires a BMU in the system as a safety feature.

Toshiba’s BMU has passed safety tests at the National LABoratory for advanced energy storage technologies (NLAB) and is compliant with JIS C8715-2, the safety standard for lithium-ion battery cells and battery systems for industrial applications.

For shipbuilders, this means the can now move away from the commonly used lead-acid batteries that have long dominated the use of on-board storage batteries on ships. The smaller and lighter Lithium-ion batteries provide higher capacity and energy density and have now certifiable become safer.

Toshiba claims its lithium titanium oxide negative electrode of the SCiB poses an “extremely low risk” of explosion or combustion even in case of an internal short-circuit caused by external shock. Fully functional at -30°C, and with a long life of over 20,000 charge cycles, the SCiB is suited to use in a wide range of automotive, industrial, and energy storage systems that require high levels of safety and reliability, claims the Japanese corporation.

Ships with the battery system can use renewable energy sources to charge the Toshiba SCiB while at sea, e.g. to power on-board equipment while the boat is at anchor and to provide power when entering or leaving port.