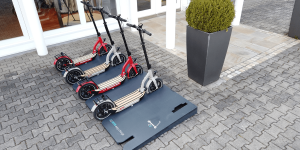 German manufacturers Metz & Intis have created an inductive charging platform for electric kick-scooters. The wireless solution called Easy Charge is suitable for the Metz Moover, but will also be available for electric scooter models from all other manufacturers. This inductive charging solution is also possible in retrofits, making it viable for other light electric vehicles such as pedelecs and electric cargo-bikes.

The order books are already open for three different versions of the inductive charging platforms – each for the Metz Moover. The Easy Charge 1 charging system for an electric scooter and the larger Easy Charge 3 and Easy Charge 5 charging stations for parallel charging of three or five scooters. The company said they will reveal more information on delivery conditions and prices shortly.

The charging solution comes from Intis. The company is also involved in setting up pilot plants for the wireless taxi charging concept (TALAKO for short) in Cologne and Mülheim along the Rhein river in Germany’s most intense industrial region. According to the manufacturer, the Easy-Charge system is suitable for both indoor and outdoor use. If an electric scooter is placed on the charging platforms, the charging process starts automatically. The duration and efficiency of the charging process should not be inferior to conductive charging processes. “An intelligent control system also makes it possible to charge the batteries more gently,” the two German companies state in their joint press release.

Preparations are also underway to make the inductive charging solution compatible with models from other manufacturers. Metz & Intis also indicate that they will be able to adapt the technology to different areas of application and customer-specific requirements in the B2B sector. Intis is also in the process of developing a version with an integrated buffer battery so that the platform can be used independently of location or power supply.

In the initially announced variants, installation is simple with a mains plug: the plug of the charging platform fits into any standard household socket anywhere in the world, claim the two companies. An integrated condition monitoring system also displays the charging status, the charge level of the e-scooters and service information. The partners say that inductive electric scooter charging station is best suited to locations “where reliable recharging of the e-scooters must be guaranteed, e.g. in public areas at bus stops, train stations, in city centres or at public transport stops”. The system also enables new business models for fleet applications, rental and cargo bikes and e-bikes.

Both currently available models of the Metz Moover – the standard model and a more powerful version called Moover Plus, which has been available since this year – can be retrofitted with vehicle components according to the manufacturers. In this way, customers of already purchased electric scooters now also have the option of inductive charging.

Presented for the first time in 2018, the foldable Moover will be manufactured in Zirndorf, Germany. Until the beginning of 2019, it was only marketed outside of Germany, but since the approval of e-scooters on German roads, it is also available in Germany (even a bit earlier thanks to a special approval at the time).

The following is a summary of the performance data: On air-suspended 12-inch wheels, the Moover, which weighs around 16 kg, reaches a maximum speed of 20 km/h, with the electric motor accelerating after a brief push via a hand pedal on the handlebars. Metz mentions 110 kg as the total payload, 250 W as continuous power and 500 W as peak power. The battery has a capacity of 216 Wh and can be charged at the socket – or now wirelessly – in three to four hours. The manufacturer states a range of up to 25 km.

The 16.5 kg Moover Plus, which does not look very different from the standard model, has a continuous output of 500 W with a total payload increased by 20 kg (130 kg).