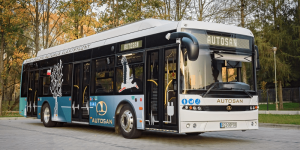 An electric bus with a replaceable battery is being developed as part of a Polish research project. The bus manufacturer Autosan and the National Centre for Research and Development and the Lukasiewicz-PIMOT consortium are carrying out the project.

The project budget is about PLN 6 million, equivalent to about one million euros that include funding through the European Union. Co-financing of the bus construction project comes from the Intelligent Development Operational Program through Poland’s National Center for Research and Development.

Autosan and the Polish consortium envision a solution that essentially places the battery outside the vehicle, that is at the rear, for easy exchanges and shorter downtimes. While little more technicals details are known, the partners expect that the “increased range of the bus and the possibility of exchanging energy storage will allow the use of electric buses not only in urban transport but also in local, regional and national transport,” says Eugeniusz Szymonik, president of the board of Autosan. The company is also hoping to decrease cost by charging the swappable batteries at times when electricity is cheaper.

No timeline for the realisation of the electric bus project has been specified in the communication.

However, demand for electric buses built in Poland is continuously strong. At the same time, domestic demand is picking up reportedly. The Polish Statistical Office announced that the share of electric buses manufactured in Poland accounted for 36 per cent of sales in the EU in 2018. Sales in Poland are expected to increase further in the coming years, as 62 local authorities have currently expressed interest in low-emission vehicles for public transport and the Polish Industrial Development Agency (ARP) estimates that 800 electric buses will be needed in the coming years.