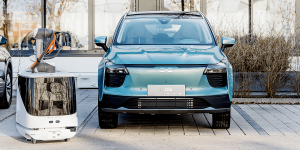 The Shanghai-based Aiways has registered seven patents in Europe and China for the development of its autonomous charging robot. The device, called CARL, is activated via an app, finds the electric car independently and docks automatically without the driver having to be on site.

The patents for CARL cover both the robot design and the loading technology, Aiways announced. The device has been developed for capacities of 30 and 60 kWh and should be able to “quickly charge any electric vehicle with a recognised charging standard”. According to the manufacturer, it takes less than 50 minutes to charge an electric car to 80 per cent. Aiways names private and corporate customers as well as infrastructure developers and operators as the target group for the charging robot.

In practice, CARL works as follows: As soon as an electric car is parked in the previously defined service area of the robot and the user orders it via app, CARL sets off with the help of GPS data, docks in and automatically starts charging the vehicle. As soon as the charging process is completed, the device locates the next customer vehicle or returns to its base station. The service area can be a public parking lot as well as the home parking lot or the workplace.

“Instead of drivers trying to find a charger, the charger will find them,” explains Alex Klose, Deputy Chairman of the Board of Management of Aiways and responsible for international business. “We want to make EV ownership as simple, easy and enjoyable as possible, and CARL provides a blueprint for how EVs can be charged in the future”. Meanwhile, the vision of an autonomous charging station seems to be developing popularity: VW and its American subsidiary Electrify America, the ChargePal research project and Innogy are also working on similar concepts.

But back to Aiways: The company belongs to the small circle of Chinese electric car startups that have made the leap into the production phase and thus obtained one of the coveted production licenses. The first Aiways U5 series model was launched in China at the end of last year, and from the end of this month the electric SUV will also be available for order in Europe. The 4.70 metre long vehicle has a 140 kW engine on the front axle, the range is expected to be 460 kilometres – but still after NEDC.

In Europe, the Aiways models will only be available through direct sales, not through traditional car dealerships and authorized dealers. In Germany, for example, the trade partner is the electric discounter Euronics, which will also organize test drives with the U5 via its branches. Maintenance will be handled by the A.T.U workshop chain.

Byton selects Qmerit as charging partner in the US