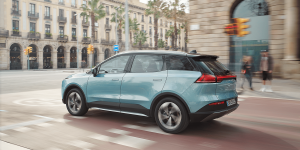 The Chinese electric car start-up Aiways will be taking pre-orders from European customers for its fully-electric SUV U5 from the end of April. Aiways intends to announce the required down payment for the European advance sales markets later this month.

A press release from Aiways mentions a “small down payment”, so it will probably be in the three or low four digits. In Europe, Aiways models will only be offered through direct sales, not through traditional car dealership models. Some local partners have been selected to help facilitate sales, such as Euronics in Germany.

Alexander Klose, Deputy Chairman of the Board of Directors for international business at Aiways, described the online advance sales as the “next important phase” in the European launch. “Our promise to customers is that they will only pay a small deposit to be among the first to receive the U5 and thus enjoy the benefits of a state-of-the-art, well-equipped electric SUV with a long range,” said Klose.

From the short press release it is clear that the online pre-sale was not necessarily planned. “Aiways uses its agility and flexibility as a start-up company and adapts its marketing activities during the pre-sales to the current situation of the retail trade, which is inevitably ‘contactless’ due to Covid-19. By introducing new online platforms and seamless digital experiences, AIWAYS is now giving European car buyers the opportunity to order the U5 online,” it says.

After a temporary production break due to the coronavirus, Aiways has now resumed production of the U5 in Shangrao, China. According to the announcement, production of the models destined for European markets is to start in July. The first deliveries in Europe are currently planned for August 2020.

Volkswagen is gearing up for PHEV business