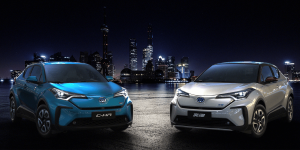 Toyota is launching three electric models on the Chinese market on April 26. One of these vehicles is also soon to be sold in select European markets.

The three electric models are the battery-electric versions of the sister models C-HR and IZOA, which were introduced last year and are built by Toyota’s joint ventures with GAC and FAW, as well as the Lexus UX 300e. The Toyota subsidiary first presented the compact electric SUV in November 2019. At the time, it was said that the UX 300e would be launched in China and selected countries in Europe in 2020, while in Japan the model would be launched in early 2021. Neither of the two reports on the matter revealed what the Lexus UX 300e will cost in China.

The Lexus UX 300e has an output of 150 kW and a battery capacity of 54.3 kWh. The charging capacity is 6.6 kW (AC) and 50 kW (DC). The designers have made very few changes to the look of the model, and the 300e also has the large grille typical of Lexus’ UX burners and hybrids. A distinguishing feature is that the electric version has two charging connections instead of just one fuel filler cap – each located above the rear wheels.

The sister models C-HR and IZOA are also converted combustion vehicles or hybrids. The vehicles are based on the TNGA platform (Toyota New Global Architecture). A 54.3 kWh battery is also used here. In the NEDC the range is 400 kilometres. However, there is one difference to the combustion engines: Since the battery was developed as part of the vehicle frame, the torsional stiffness is 20 per cent higher due to the large component. However, nothing is known about an export version of the CH-R EV, which should also be offered as a hybrid in Europe.