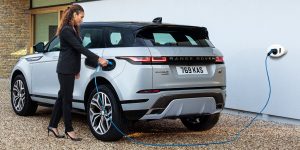 The drive system is a transaxle layout: the combustion engine is classically located at the front of the engine compartment, but the electric motor has not been integrated into the automatic transmission – instead, it is located separately from the combustion engine on the rear axle. The electric motor has an output of 80 kW, should be able to accelerate the vehicle to up to 135 km/h in electric mode, and depending on the model, the purely electric range is between 64 and 68 kilometres according to WLTP. Land Rover states the gross capacity of the battery as 15 kWh, it is made up of seven modules with 12 cells each.

Like some PHEV models from Mercedes, the two compact SUVs from the British company can also be charged with direct current. The maximum charging capacity here is 32 kW, which means that a charging process from 0 to 32 per cent should take “just under 30 minutes”. Only single-phase charging with seven kW is possible via AC, while charging to 80 per cent takes around one and a half hours. At a household socket, 6:42 hours pass until the battery is fully charged. Unlike the P400e versions of Range Rover and Range Rover Sport, the charging socket is not located in the radiator grille, but above the rear wheel on the driver’s side.


One advantage of the transaxle hybrid is actually that the hybrid technology at the rear has little or no effect on the combustion drive at the front – only the tailpipe may need to be relocated. However, JLR has decided to use a completely new combustion engine on the PHEVs: Until now, both models have been available exclusively with four-cylinder engines with two-litre displacement (petrol and diesel) from the company’s own Ingenium range. The PHEV uses a derived three-cylinder gasoline engine with 1.5-litre displacement. This is to produce 147 kW (just like the weakest four-cylinder petrol engine to date), which together with the electric motor provides a system output of 227 kW. In the smaller Evoque this means a standard sprint to 100 km/h in 6.4 seconds, in the larger Discovery Sport it is 6.6 seconds. The British specify the WLTP consumption with 1.9 or 2 litres per 100 kilometres.

The hybrid technology also has an influence on the four-wheel-drive that is common in Land Rover: a mechanical four-wheel drive, in which the combustion engine also drives the rear wheels via clutches and differentials, is not possible because of the battery and the electric motor on the rear axle. The P300e models have four-wheel drive when both the combustion engine and the electric motor are running. According to Land Rover, the off-road capability of the models should not be affected.

Instead of the conventional hydraulic braking system, the two PHEV models have a newly developed brake-by-wire system that is designed to switch seamlessly between regenerative braking and conventional friction braking. According to the manufacturer, a 0.2g delay is possible during recuperation.

Byton furloughs half their US workforce