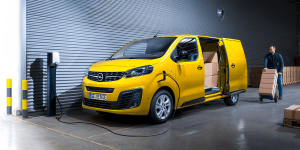 Opel has provided more details on the fully electric version of the Vivaro van, which will be available for order from the summer and is expected to reach the first customers in the course of the year. Prices for the Vivaro-e will not be available until a later date.

Until then, the technical details will have to do: As expected, the Opel Vivaro-e uses PSA technology. The electric motor has an output of 100 kW, the battery has an energy content of 50 kWh. The top speed is 130 km/h. Since the weight and air resistance of the van are higher than those of the previously shown small cars Peugeot e-208 and Opel Corsa-e, the WLTP range of 230 kilometres is lower.

New, however, is the optional larger battery, which has an energy capacity of 75 kWh. This should enable a range of up to 330 kilometres according to WLTP. This battery relies on 27 instead of 18 modules since the battery is installed in the underbody of the vehicle, but even the larger battery should not affect the cargo space. Both batteries are liquid-tempered, which should increase the range and service life. Opel guarantees eight years and 160,000 kilometres.

The Vivaro-e is charged via a CCS connection above the front wheel on the driver’s side. Opel says that “on a 100 kW rapid charging station” the 50 kWh battery can be charged to 80 per cent in 30 minutes, while the large 75 kWh battery takes 45 minutes to charge. This suggests a DC charging capacity of 100 kW, in fact over this range (as with the Corsa-e) it is 80 kW. The Vivaro-e will be delivered ex-works with a single-phase 7.4 kW onboard AC charger, with an optional 11 kW onboard charger for three-phase power.

The Vivaro-e is available in three vehicle lengths (4.60 metres, 4.95 metres and 5.30 metres) and various body styles. The variants include the transporter, a double cab, and the station wagon for transporting people – or as a platform for vehicle bodies. Depending on the model, the cargo space of the van can hold between 4.6 and 6.6 cubic metres.

The maximum payload is up to 1,275 kilograms, slightly less than the diesel version – after all, the large battery weighs up to 500 kilograms. Because of the low centre of gravity, however, the battery should improve the handling of the vehicle.  According to Opel, the Vivaro-e is the only battery-electric van in its segment that can be ordered ex-works with a trailer hitch and can pull trailer loads of up to 1,000 kilograms.