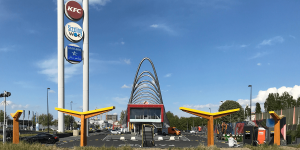 Fastned opened its first fast-charging station in Amsterdam this weekend. The Dutch company claims “hundreds of electric cars can be charged per day at this station” and that the design would allow the addition of more fast-chargers in future.

Electric car drivers may now find the fast-charging station on a food strip at the busy A2/A9 junction. Fastned had teamed up with real estate developer Caransa Group for the installation but failed to say how many charging stations it installed.

While Fastned CEO Michiel Langezaal positioned the new station as a foray into urban lands, Caransa welcomes the engagement and expects that electric drivers will visit the restaurants located there more often.

It is also a welcome change of tune from Fastned that had last been cautious about the future due to the Covid 19 pandemic and despite its positive growth figures in 2019. Due to the current restrictions on public life and travel, daily turnover fell by 70 per cent from February to March. “In addition, Fastned is experiencing delays in the construction of new stations and the modernization of existing ones,” the company wrote at the time. “A third effect is that the supply of electric vehicles to the market is likely to slow down due to temporary shutdowns of car factories,” which Fastned expects will certainly slow down growth in the next period.

Fastned currently claims 115 fast-charging stations in the Netherlands, Germany and the United Kingdom. The last opening in Amsterdam has been made possible through the BENEFIC project, which is part of the European ‘Connecting Europe Facility’ program, funded by the European Commission. The local DKTI-Transport regulation of the Ministry of Infrastructure and Water Management has played a part as well.