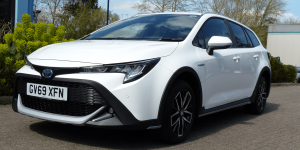 Toyota has revealed the official pricing and specifications for the new Corolla Trek in the UK, a new version of the British-built Corolla Touring Sports hybrid. Prices for the petrol-electric hybrid start at £29,225.

The Corolla Trek can be specified with one of two petrol-electric hybrid powertrains. The 1.8-litre four-cylinder is capable of 55.3mpg on the WLTP combined cycle in the standard Corolla Touring Sports, while the more powerful 2.0-litre version manages 50.4mpg. The previous version starts at a price mentioned above of £29,225, while the 2.o-litre version starts at £30,950.

The hybrid car is described as being for “families who want a tougher vehicle to match their active lifestyle,” without giving much of an idea of how an “active lifestyle” is supported. The new model is being touted as the result of a collaboration between Toyota and the British bicycle and electric bicycle company Trek Bikes. Just what this collaboration involved or how the bicycle company influenced the model was not stated.

Toyota claims that the collaboration with Trek Bikes is “a partnership that brings together two brands that share environmental values.” This is perhaps a cheeky claim for a company that has advertised its hybrid vehicles by advertising against purely electric cars as well as being charged with misleading advertising on the benefits of hybrids. In the case of this hybrid, the comparison in “environmental values” between a car company reluctant to step out into fully-electric vehicles and a bicycle company is tenuous. Electric bikes use a fraction of the lithium resources or electric power of any electric car, and certainly do not produce the kinds of emissions emitted by a hybrid vehicle. It seems this collaboration primarily involves marketing association.

Regarding boot room, Toyota merely says, “The package is designed to add to the Corolla Touring Sports’ already enviable load space, comfort and equipment by giving the new editions the ability to take customers wherever their outdoor hobby, sport or pass-time requires.” Since a publicity photo depicts the transport of bicycles being managed with a rack on the roof, (as is possible with literally any kind of car), it would seem the connection to cycling lifestyles mostly entails Toyota providing 16 Corolla Treks as support vehicles for the Trek-Segafredo World Tour Teams, during the European cycle racing events.

While Autocar says “Toyota Production has already begun at Toyota’s factory in Burnaston, South Derbyshire, although deliveries are expected to be delayed as a result of the ongoing coronavirus pandemic.” The Toyota UK media site says “The new Corolla Trek will continue to be built at Toyota’s plant at Burnaston, Derbyshire, the UK when manufacturing resumes.”