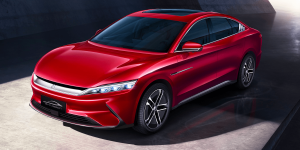 BYD is targeting European markets and just announced to bring a second BEV here, its brand new Han electric sedan. The model was supposed to debut in April at Auto China, which was cancelled due to Covid-19 pandemic, and now will come to Europe.

It is not clear when such a launch event would be possible in Europe – however, BYD wants to stick to the schedule of selling the Han EV in China from the end of June. Although BYD has not yet given a date for the premiere of the announced Han EV, it has revealed more details about the electric car.

In Europe, BYD is aiming for a base sales price of between 45,000 and 55,000 euros for the Han, which will be equipped with the new Blade battery, according to the most recent announcement. In China, the Han EV will arrive either with a 160 kW electric motor or as a twin-engine version with a system output of 197 kW. BYD says the range of the Han is 605 NEDC kilometres, and the sprint from 0 to 100 km/h should take only 3.9 seconds. BYD has now also revealed that the motor control unit uses silicon carbide technology.

The Han will also be equipped with the DiPilot, a self-learning autonomous driving assistant. “The hardware configuration and 5G technology make the Han EV BYD the most intelligent and networked driving experience to date,” BYD describes the system. However, BYD does not provide any further details about the functions.

BYD states that the Han was “conceived, designed and manufactured to standards” that are “more attuned to European luxury cars”. Wolfgang Egger, Global Design Director at BYD, who was previously Head of Design at Audi and worked for Seat and Alfa Romeo, is also cited.

“The Han EV boasts cutting edge technology, benefiting from BYD’s more than ten years of experience in the research and development of EVs,” said Yubo Lian, senior vice president of BYD. “Its use of the ultra-safe Blade Battery, as well as BYD’s in-house pure electric platform, body structure design, eco-friendly materials and safety systems make the Han EV the safest electric car currently on the market. We believe that the Han EV combines the best of Eastern wisdom and Western aesthetics.”

It’s not yet clear which European countries BYD has in mind with the Han. Recently, the Chinese manufacturer reportedly announced the European launch of its Tang EV600 electric SUV, starting this year in Norway. As with the Tang, the Han is also available in China in a PHEV version, although BYD makes no mention of the plug-in hybrid coming to Europe in the current announcement.