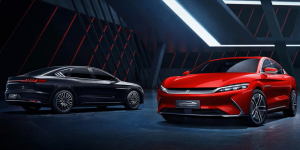 BYD has released the first pictures of its new sedan Han, which will be offered as both BEV and PHEV and will debut at the Beijing Auto Show in April. The market launch is scheduled for June.

The purely electric version will be offered with either one or two engines, while the plug-in hybrid version will combine a combustion engine with three electric motors. In the smaller version of the battery-electric Han, the rear-wheel drive will deliver 218 hp, while the dual motor variant features up to 268 hp. The range is expected around 450 km, however it was not specified if this applies to both vehicles or just one.

In the PHEV version, BYD has combined a 2.0-liter turbocharged four-cylinder engine with 189 hp working alongside a trio of electric motors to create an impressive combined 476 hp. Another factor that BYD was proud of was the aerodynamics of the design – this differs a little between the two versions of the vehicle, but the battery-electric version beats Tesla Model S’ drag co-efficient of 0.24 by a hair’s breadth at 0.233.

Furthermore, the BYD Han will be equipped with a new generation of lithium iron phosphate (LFP) battery from BYD called “Blade Battery” with a 50 per cent higher energy density. The new battery will also be presented in Beijing, and the manufacturer claims not only higher energy density, but also an advancement of safety features as well as longevity of the battery. Apparently, it will survive an 8 year period with a calculated range of 1.2 million kilometres. This would also cut costs by around 30% “based on its own supply chain.”

Update 13 July 2020: BYD has launched its electric Han on the Chinese market with prices starting at 229,800 yuan (€29,000). The sedan features the LFP-chemistry ‘Blade Battery’ in all three versions, the top model costs at least 279,500 Yuan (€35,000). A plug-in hybrid offshoot of the BYD Han is also available. As reported, BYD intends to offer the electric sedan in Europe in future.

While the power of the rear-wheel-drive model with 163 kW corresponds to almost every announcement (instead of 160 kW), the current report talks about a significantly more powerful four-wheel-drive version. This is now said to produce 363 kW and to be able to accelerate to 100 km/h in under four seconds.