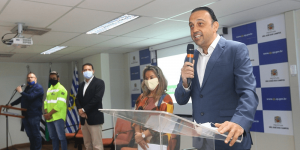 BYD will supply 12 all-electric articulated buses to the new Green Line Project corridor, the main urban mobility project in the city of São José dos Campos, in Brazil’s São Paulo state. All the buses will be delivered in the next 18 months.

The electric buses on order measure 22 metres and are made by BYD at their facility in Campinas in Brazil. The plant has an annual production capacity of 720 chassis and could be doubled the capacity according to the production plan, says BYD.

The new Green Line project runs in stages. The corridor’s first stage will have 14.5 kilometres, connecting the south and east of São José dos Campos as well as the central region.

According to the City Hall of São José dos Campos, the Green Line was developed in line with the guidelines of the cities’ Master Plan. The main goal is to promote urban and economic development, preserving the environment with a Rapid Mass Transit inspired by the most advanced systems in the world (Bus Rapid Transit).

It is also not the first time, the city is working with the Chinese manufacturer. The town launched a fleet of electric cars for its entire Municipal Guard with BYD e5 and e6 models leased from BYD.

Overall, the company has a run in Latin and South America – mostly from bus fleets. Argentina has started electrifying its bus fleets with BYD buses, and in Columbia, Bogotá launched of a tender procedure for the purchase of no fewer than 594 electric buses that are to be integrated into the TransMilenio metro bus system this year. Also Ecuador is expecting delivery of electric buses reportedly.

Most notably though Chile has been a good customer to the Chinese company. In summer last year, Chile ordered 183 all-electric buses from BYD. Towards the end of last year, BYD launched Latin America’s first electric bus corridor in partnership with local operators Enel X and Metbus in the Chilean capital of Santiago.