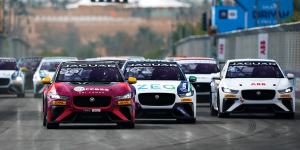 Jaguar will discontinue the Formula E support racing series I-Pace eTrophy at the end of the season. Jaguar Racing cites a strategic reorientation due to the COVID-19 pandemic as the reason for the early finish of the one-make cup.

This means that the racing series, which was launched in 2018 as part of the introduction of the production version of the I-Pace electric car, will end after just two seasons. However, Jaguar’s commitment in Formula E remains unaffected by this step.

In the first season, the Brazilian Sergio Jimenez became the first eTrophy champion. This year the racing series is in its second season. So far, however, only three of the ten scheduled races have been held. The main reason is the suspension of Formula E due to the Corona Pandemic.

Irrespective of this, the one-make series has not had an easy time of it from the very beginning: a total of 20 electric cars should compete in the first season. In the end, there were only twelve drivers. In the second season, the grid could no longer be maintained. The races in Mexico and Diriyya were contested with only ten drivers.

It is still unclear how many more races of the I-Pace eTrophy will be staged in the second season currently underway. This depends on whether Formula E will finish the current sixth season at all.

Positive: Based on its experience in the eTrophy racing series, Jaguar announced as early as December of last year that customers of an I-Pace would receive up to 20 kilometres more range with a software update. “Although the new software update does not change the officially certified range specification, the fine-tuning achieved by the eTrophy analysis allows customers to benefit from up to 20 kilometres more range, depending on the deployment profile,” Jaguar wrote in the accompanying communication.

Mazda launches production of the MX-30 in Ujina