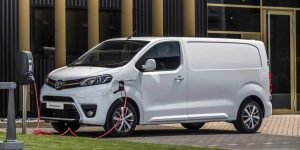 Toyota plans to launch battery-electric versions of the Proace and Proace City in 2020 and 2021 respectively with well-known PSA technology. The Proace has a decisive difference in comparison to the three other commercial vehicles from PSA.

The information is taken from the Toyota website in the Netherlands, where the Proace Electric will be the first to be offered from October this year. The commercial version of the Proace Electric, targeted as a delivery vehicle or for tradespeople, is scheduled to be launched this year. The passenger version with up to nine seats will follow at the beginning of 2021, and the Proace City Electric has been announced for the end of 2021.

The technical data mentioned on the Dutch website are identical to those of the PSA trio: Depending on the battery, between 230 and 330 kilometres WLTP range, and between 1,000 and 1,275 kilograms payload, depending on wheelbase and battery. The three-phase 11-kW onboard charger also appears to be optional for Toyota.

However, Toyota is apparently planning a greater variety of body styles. Lengths are to be offered (Toyota calls them Compact, Worker and Long Worker), as well as a double cab with a platform (Double Cab) and a truck with open body or tipper.

There is, however, a remarkable difference to the PSA triplets: Toyota grants a warranty of 15 years or one million kilometres for the battery of the Proace Electric. The long battery warranty period has apparently been chosen by Toyota as a unique selling point: As reported, Lexus offers a ten-year warranty (or one million kilometres) for all traction battery functions for its first BEV model UX 300e. But the conditions are also reminiscent of Lexus: the car has to be serviced by a Toyota dealer, and in addition, only 75 per cent of the original value is guaranteed.