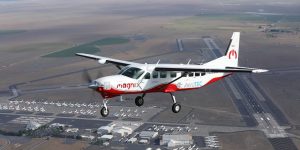 The aircraft is an 18-year-old Cessna Grand Caravan, which was converted to an electric propulsion system with a magni500 electric motor by the engineering firm AeroTEC. The electric motor manufacturer magniX was responsible for all developments related to the propulsion system, AeroTEC took on the integration into the aircraft – and also testing. The test flight took place at the AeroTEC flight test centre at Grant County International Airport (KMWH) in Moses Lake in the US state of Washington.

According to the two companies, the eCaravan is the largest electrically powered production aircraft to date. The emphasis here is on series production aircraft, with some individual pieces such as the Solar Impulse or electric military drones being larger. MagniX CEO Roei Ganzarski said at a press conference around the maiden flight that the Cessna Caravan was not chosen because of its record size, but because they were looking for a practical and widely used aircraft type. “Let’s make it the Tesla of the air if you will,” said Ganzarski.

During the half-hour test flight, AeroTEC test pilot Steve Crane stayed close to the airfield in case there were any problems. According to Crane, however, the test flight was “flawless”. Ganzarski stated that the electricity for the test flight cost about six dollars – a caravan with the old turboprop engine would have consumed fuel for 300 to 400 dollars. And the eCaravan was more economical than expected. At the time of landing, it still had ten per cent more energy in the batteries than calculated, according to Ganzarski.

But he was not supposed to reveal the flight time that would have been possible with it. But that’s what it would probably depend on in the series: With a maximum flight time of 30-40 minutes, the eCaravan’s potential applications would be limited. Nevertheless, the two partners see a market for the aircraft: the batteries would be technologically up to 2019 and would be sufficient to transport four to five passengers over 160 kilometres – including the legally required reserves. Five per cent of all commercial airline flights worldwide are shorter than those 160 kilometres or 100 miles. Charging the batteries should be similar to the flight duration – 30 to 40 minutes.

AeroTEC and magniX are working on obtaining approval for the eCaravan by the end of 2021. “There’s no roadmap for testing and certifying electric aircraft,” says Lee Human, CEO of AeroTEC. The goal is to be able to fly the distance of 160 kilometres with the full load by the end of 2021. The Cessna Grand Caravan 208B can carry a maximum of 14 passengers – instead of four to five in the eCaravan at present. This is to be made possible by new batteries, such as lithium-sulfur batteries. A switch to fuel cells is also still in the pipeline.