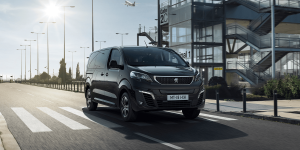 Peugeot is planning to electrify their Traveller. The van with up to nine seats is largely identical in construction to the new Opel Zafira Life, for which an electric version has also been announced for early 2021.

The Peugeot e-Traveller is scheduled to be launched in Europe at the end of 2020, several months ahead of its Opel counterpart. The drive system is the same as that of the Peugeot e-Expert and its sister models: The electric motor has an output of 100 kW, and there is a choice of two battery versions with 50 or 75 kWh. The latter enables a WLTP range of up to 330 kilometres.

The charging options are also the same: a single-phase 7.4 kW charger is installed ex-works, a three-phase 11 kW charger is optionally available. With direct current, the small battery is filled to 80 per cent in 30 minutes, the large battery in 45 minutes, which corresponds to a charging capacity of 80 kW.

What is important with the e-Traveller compared to the e-Expert is, of course, the cab. The model is available in two basic versions ‘Shuttle’ and ‘Combispace’, both versions are available in two lengths. The Shuttle version is aimed at professional transport companies such as taxi operators, airport or hotel shuttles. There is also the ‘Business’ version with five to nine seats and the ‘Business VIP’ version with six or seven leather individual seats and comfort features such as three-zone air conditioning.

The Combispace is intended for private customers, such as large families or travellers with sports equipment, as Peugeot writes in the message. The interior should be able to be quickly adjusted thanks to sliding and removable seats. The Combispace is available in the ‘Active’ and ‘Allure’ versions.

Essentially, the 1.95-metre-tall van should still fit into most parking garages and underground car parks. In terms of length, customers can choose between 4.95 metres (standard) and 5.30 metres (long). The 4.60-metre version available for the commercial vehicle trio is not offered for the e-Traveller.

Like the other electric models from Peugeot, the e-Traveller will be integrated into the digital ecosystem of the French company in order to be able to plan the route with charging points on the smartphone, for example. Further services are intended to support customers in entering the world of electric mobility and also help with resale.

In Europe, the Peugeot e-Traveller will be launched at the end of 2020; prices have not yet been revealed. Production will take place in France near Valenciennes.