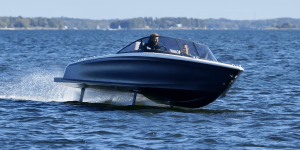 The electric speedboat of Sweden’s Candela is the world’s first electric hydrofoil, according to the company, and as the (old) concept is still both wondrous and curious enough, they’ve now published a 40-min virtual cruise. Also note, Candela is ready to deliver.

It’s not the first time we’ve come across Candela as we had featured it in the rather fun Short Circuit category for those summer vibes last year. Now the company has released the Candela 7 along with some specs and said video.

The Candela Seven “flies above the surface” says the company and claims this hydrofoil reduces the energy consumption of the 40 kWh battery by 80 per cent compared to planing boats. This leads to an electric range of 92 km (50 nautical miles) in 20 knots (37 kph), on par with combustion engine boats. By another comparison, the conventional non-foiling boat of the same size uses 6 kWh per nautical mile, says Candela.

A word on a hydrofoil – the Candela comes with a sort of wings attached underneath not unlike a drop keel or aerofoils on aeroplanes. Once the boat reaches a certain speed, the wings are released and the speed boat “takes off” as the makers say. The idea for the technology goes back to 1919 and in other ships today lifts the hull clear of the water at speed. Still, Candela’s is the first electric boat to make use of the low-resistance and massively reduced friction.

For the boat to ride stable on its small wings, Candela claims it got sensors and on-board computers to “ensure a rock steady ride in virtually all conditions”. You can see how that works in the following clip, particularly when the driver repeatedly zigzags through big waves from a cruise ship and later a ferry in the. Those finding 39 minutes a little long, Candela has provided tags that let you skip the steps from unplugging the charger over taking off and getting to top speed before landing back at the dock.

Also note, you can get your hands on this electric boat as Candela states they “still have a few production slots available for deliveries for the summer of 2020”. That is if you have 245,000 euros to spare (net). Serial production of the Seven has already started at Candela’s Lidingö factory outside Stockholm.