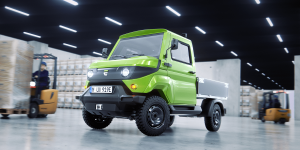 Evum Motors, the spin-off of the TU Munich for the commercialization of the all-electric commercial vehicle aCar, is back with some news. Sales of the limited edition ‘First Mover’ will start this Tuesday with Evum taking orders through their website online.

The aCar special edition had been announced for the first time late last year and includes a larger battery package (16.5 kWh), work lights and fog lights, an external 230 V socket, high-voltage charging and a trailer coupling. The net price is 39,900 euros according to information provided at the time. For comparison: the basic version of the aCar is to be offered for 29,900 euros net, at least Evum said as much some time ago. However, official pricing is not out yet for the version going online on Tuesday.

Also, note that it appears we are talking about the European market for now. The series-production version leaving the halls next week has been newly homologated for sales in the EU. It is a class N1 for motor vehicles for the transport of goods with a maximum permissible mass of up to 3.5 tonnes and has become heavier compared to the prototype, but now also has more power. The standard battery with 12 kWh storage capacity should be sufficient for 100 kilometres. With this version, Evum primarily targets gardens, municipalities and craftsmen, but also fruit growers. Forest enterprises and winegrowers working on uneven or steep terrain may as well look into the aCar as a zero-emission option, according to the company.


Evum also stresses that this aCar is particularly suitable as an entry-level electric vehicle as its 48V architecture dispenses with expensive high-voltage technology and can be charged at any power outlet. “The concept, which was developed specifically with a view to low complexity and maximum benefit, is the decisive reason for the aCar’s cost-effectiveness,” the current communication states.

Initially, Evum and the team at the TU Munich had designed the aCar for markets like Africa, hence the name. The prototype came out in 2016, tailored to the rural structure, Evum announced at the time. Following tests in Ghana, the initiators presented a first revised version of the aCar at the IAA 2017.

However, even before the founding of Evum Motors, the team had more than one market in view. It aimed to bring the aCar into use worldwide, from Africa to Brazil to Indonesia, but also in Europe. Here, they had envisioned a price of 22,000 euros for a standard-aCar, in developing countries only about 10,000 euros.

It remains to be seen how much the ‘First Mover’ edition will cost. The company is making the commercial electric vehicle at their plant in the town of Bayerbach in Bavaria.

Sales open this Tuesday, 16 June on the Evum website.

Update 17 June 2020: A few days after the announcement, Evum Motors has now officially started the distribution of the electric transporter aCar. Now the prices are also known: The limited special edition called ‘First Mover’, initially available as the only variant, is available in the configurator from a net price of €34,490 (without bodywork). This is 5,410 euros less than initially announced.

Some optional extras are already available for this purpose: For example, the flatbed body costs 1,500 euros extra. Alternatively, a tarpaulin or a box is also available. The high-voltage charging costs 1,990 euros extra, and Evum Motors also offers a “municipal package”.

The basic version of the light commercial vehicle will be available on the market at a later date for 29,900 euros net. Besides, the ‘Select’, ‘Select Plus’ and ‘Select Pro’ features have also been announced.

At the moment, the price does not yet include the German environmental bonus as BAFA has yet to add the aCar to its list of eligible electric vehicles.