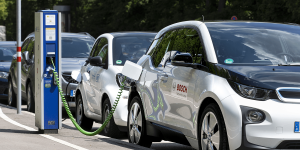 Bosch’s Europe-wide network of charging stations has currently passed the 150,000 chargepoint mark and is to be expanded to around 200,000 chargepoints by the end of 2020. The German company is focusing primarily on roaming agreements.

According to the company’s announcement, there are currently more than 27,500 charging points in Germany. Only recently Enel X announced a roaming agreement with Bosch.

Users pay with their previously deposited credit card and receive a monthly overview of their charging costs via the app. There is no physical charging card. However, Bosch has decided to forego a uniform price per kilowatt-hour. The app is intended to help users avoid “unpleasant surprises when billing”. “Bosch relieves users of the tiresome research work and clearly lists what charging at individual charging points costs and which terms of use apply,” the company says. Bosch justifies its service with the fact that, according to a survey by EuPD Research, there will be 288 car electricity tariffs in Germany in May 2020 alone. And according to a survey by NewMotion, 15 per cent of all electric car drivers use at least five charging cards, while 45 per cent of all electric car drivers still use two to four charging cards.

However, a sample in different cities and at different operators shows that Bosch Service is not always the cheapest solution at a charging station. Many operators – from local public utilities to nationwide CPOs such as Allego and Innogy – often charge a 37-cent starting fee per charging process, plus a kWh and time component. A charging process at Ionity also costs 0.37 euros starting fee, after which Bosch passes on the Ionity price of 0.79 euros/kWh to its customers, so even charging directly at Ionity is 37 cents cheaper.


At an Innogy AC charging point in Berlin, the charging process costs the aforementioned 0.37 Euro starting fee, each kilowatt-hour is charged at 0.418 euro, plus a flat rate of 0.597 euro per 60 minutes – at Innogy Direkt the kWh costs 0.39 euro, without starting fee and time component. For those charging in Berlin at a Heldele charger, pays 0.119 euro/kWh and 0.06 euro/min in addition to the 37 cents. In other words, the Bosch Service gives you access to many charging points. But if you want to charge as cheaply as possible, you still have to compare several providers for each charging point.

“Charging must be uncomplicated and seamless for everyone. The intelligent charging services from Bosch are an important key to broad acceptance of electromobility,” says Elmar Pritsch, chairman of the Connected Mobility Solutions divisional board at Robert Bosch GmbH. “With our charging services, we are developing the universal ticket to one of the largest networks of charging stations in Europe. This will make electric mobility even more suitable for everyday use.

Bosch is also working on a function called “Convenience Charging”, which, as a networked navigation and charging solution, will closely link the infotainment of the car with charging. Car manufacturers and operators of electric fleets should thus be able to stand out from the competition with a “new user experience. Bosch describes the function in such a way that the charge level, range and availability of the charging stations are adapted to each other in real-time. If, for example, a charging station planned in the route is occupied at its expected arrival, the system should automatically reschedule the route guidance. The driver should also be able to store his or her own preferences, such as the loading speed, loading prices, but also loading stations with nearby restaurants or free Wifi access.

Machine learning methods are to be used to teach the software and thus make the recommendations and individual services “more accurate” with each charging process. Bosch does not mention when “convenience charging” is to be introduced and whether there are already initial customers for the solution.

VW starts sales of ID.Charger as “Wallbox for everyone”