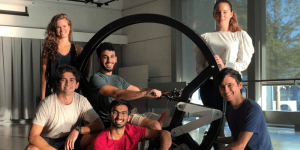 A special kind of electric vehicle is currently being developed by a team from Duke University: the EV360 electric unicycle. It is expected to break a new speed record for this type of vehicle at over 70 mph – the equivalent of around 113 km/h.

This is not the first time such a vehicle has been tried out, such vehicles first emerged in the late 1800s. But comically, the problem was that if the driver hit the breaks too fast the driver would be hurtled around like a pet gerbil on a wheel.

Although the Duke University team have fixed this problem the head engineer and test driver Anuj Thakkar explains that the EV360 impossible to steer. Until the monocycle hits 24 kph the rider has to stabilise the circus-like vehicle with their feet. Once it gets going, the driver has to try and hold it steady and hope for the best.

Not surprisingly Thakkar says he has had about 15 crashes in the vehicle so far, luckily none of them serious. He told Interesting Engineering: “The first thirty seconds of each run are the scariest. It’s when you’re trying to keep the vehicle upright while still accelerating. But once you stabilise at around 15 miles per hour, it’s smooth-sailing,” Thakkar says. “At that point, you kind of just have to hold tight, trust the vehicle, and enjoy the ride.”

This, of course, means that the mono-wheel has no real practical transportation use, but the team is using it as an engineering experiment and intend to break the speed record for monowheels. For this they will have to up the speed a bit – currently, the record for monowheels lies at 117 km/h with a combustion engine.

“We started the monowheel project as a way to apply the skills we gained in classes to a novel and challenging problem, and to build our practical experience,” team engineer Carlo Lindner explained. “There is no handbook for how to build a monowheel; it calls for a lot of creativity, and that’s been a great way for us to learn.”

Other electrified unicycles have followed quite a different design. In 2018 a British engineer came up with a self-balancing unicycle. Later in the same year, a Spanish firm Bel y Bel came up with a monowheel Vespa electric scooter. This model, however, though hopefully a little more steerable, only goes up to 35 km/h.