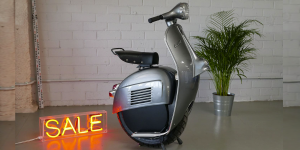 All things considered of course, after all, there is only so much one can expect from a little design object. The performance is more serious than a simple last-mile ride as the Monowheel Z runs on a 1,000 Watt motor. The range is not too bad either at 60 km and a top speed of 35 kph. Acceleration sets in as soon as you lean in there. Moreover, the entire (or half, kind of) electric scooter weighs around 70 kg and the gyroscope technology helps maneuvering.

And there is another argument to be made for Bel y Bel – the fun loving company that also names Akira Toriyama’s Dragon Ball as a source of inspiration, takes care to not only revive classic designs but to also recycle and upcycle materials.

Sure, the Vespa is a bit of an obvious choice. Yet in this they are not alone. We were reminded of Italian designer Pierpaolo Lazzarini who recently fused the iconic scooter with a modern jet ski.

But back to Barcelona and Bel y Bel. The company has not released any pricing for their electric Monowheel, not could we find a link to pre-order. Still this unicycle could be a fun but more so affordable alternative to Vespa’s own electric scooter. The original Vespa Eletricca by Piaggio is going for a whooping 6,390 euros. Piaggio had said before that they see their electric scooter in the luxury segment of the market (clearly) yet it does seem a pretty steep price. So, electric unicycle it is perhaps…