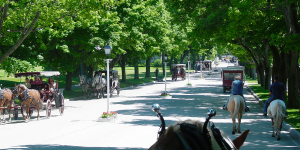 A project to use electric vehicles to replace horse-drawn carriages on the Prince Islands off the coast of Istanbul was put on hold shortly before its launch on account of some withheld paperwork.

Officially district governor’s office banned the testing and use of the vehicles because the necessary documents for the electric vehicles had not been submitted and the technical checks were therefore not been updated.

At the same time, there is a lot of resistance to the transport switch since Istanbul’s Princes’ Islands have long been synonymous with horse-drawn carriages. The islands are of the most popular tourist destinations in Istanbul. After a glanders illness outbreak, horse-drawn carriages were banned and dozens of horses had to be put down. On top of that, animal rights activists had been campaigning against the severe mistreatment of the carriage horses for years.

Despite all of this, it seems the Islands are still struggling with the necessary identity change from horse-drawn carriages to electric vehicles. It seems not everybody is taken with the style and feel of the electric vehicles that are supposed to replace the carriages. While the mayor, pictured above, is in favour of the vehicles, the district governor considers the imported EVs to be “golf carts” at best and unfit for road use. This perhaps explains some of the paperwork troubles that seem to be hindering the project.

In Vienna, Austria, horse-drawn carriages are being replaced by historic electric vehicles that have authentic historic value – these electric carriages were first made over a hundred years ago and have simply been vamped with the latest electric parts.

Update 03 August 2020: After some bureaucratic delays, the project has now officially started: The electric buses are available in two versions and started their first official test tours a few days ago. The smaller version offers four seats while the version with 14 seats is intended for excursions in larger groups.