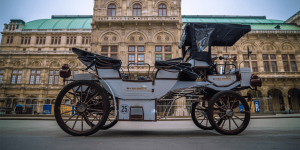 Not only humans but horses too are hit by the coronavirus crisis although only indirectly. Vienna’s iconic horsedrawn carriages, the Fiakers, have come to stand utterly still with no guest sharing the ride. Now, they could be replaced for good.

Rather than saving the long trodden business, the Austrian Animal Welfare Association is saying that the horse-drawn carriages should not be kept and the animals freed instead. The demand: By the end of 2021, no horse should be powering a Fiaker.

Instead, the association wants the Fiaker company to utilise the crisis to boldly switch to a form of electric horsepower – by using a battery-powered version of the carriage. And indeed these exist and had their trial run last year as reported. Only that time it was a PR move by the local utility Wien Energie to promote their charging stations. What’s more, the E-Fiaker looks back at a similarly long tradition as the horses: the carriages were based on exactly those electric vehicles that whirred around city streets until 1910 before they were squeezed out by their fossil-fuelled counterparts.

Still, Vienna has not made a decision yet. At the moment, the city supports the horses with a monthly food subsidy worth 250 euros throughout the crisis. Should Vienna make it compulsory to use E-Fiakers in future, however, the animal welfare association wishes to see the 400 horses in service go to animal lovers and protectors. Their press release also contains a picture of the E-Fiaker above utilised by Wien Energie and employs arguments usually heard when demanding the switch from fossil fuels to EVs: The E-Fiakers would save money for food/fuel and “maintenance” meaning medicine and visits from the veterinarian.

Also, Austria’s capital would not be the first to switch from animal work to electrons. The Fiakers in New York’s Central Park, for example, have reportedly been replaced by 300 electric carriages made by the Turkish company Fayoto.