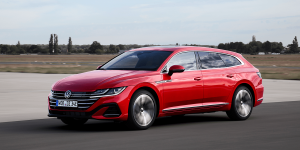 VW has just presented the new edition of the Arteon and revealed a second version: the Arteon Shooting Brake. Both models are offered as plug-in hybrids for the first time.

VW has decided to split this into two parts: While the Passat Variant should continue to focus on the largest possible and most usable loading space, the Arteon Shooting Brake should score points with customers by focussing more on design and dynamics instead of utility value.

The Shooting Brake has a boot capacity of 565 litres, and with the rear seat backrests folded down, it should be up to 1,632 litres. As expected, this puts the Arteon slightly below the Passat Estate, but the lifestyle station wagon should still be able to load items up to 2.1 metres long.

In terms of drive systems, Volkswagen is merely announcing that both body versions will be offered with a plug-in hybrid for the first time. “With the long purely electric range many Arteon eHybrid and Arteon Shooting Brake eHybrid drivers will be able to cover their daily driving distances with zero emissions locally,” writes VW. This will be the 160 kW PHEV from the Passat GTE, not the PHEV versions of the Golf 8 with 150 or 180 kW presented as ‘eHybrid’.

According to the German publication Auto Motor und Sport, the PHEV in the Arteon, in contrast to the Passat, is not supposed to be coupled to the GTE equipment. The plug-in hybrid is to be available as an engine for all equipment from ‘Elegance’ to ‘R-Line’.

In its model update, VW has also revised the interior and brought the latest versions of the infotainment system to the Arteon. The assistance systems have also been expanded. For example, the optional Travel Assist is intended to enable partially automated driving up to 210 km/h.

VW has not yet revealed the prices for the revised Arteon, the plug-in drives, or the Shooting Brake. According to the Auto Motor und Sport, however, the surcharge for the lifestyle station wagon will be 885 euros, and this already includes an electrically opening tailgate and the comfort key.