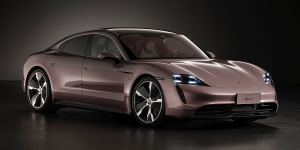 Porsche has now presented the announced entry-level version of the Taycan with rear-wheel drive in China. It offers an engine output of up to 350 kW and is available with both well-known battery options.

Ex works, the model simply called Taycan (without any further name additions) is combined with the 79.2 kWh battery. Optionally, the new Taycan with rear-wheel drive is also available with the 93.4 kWh battery. With the small battery, the maximum output of the rear engine is 300 kW, Porsche states the range as 414 kilometres, but in the NEDC, as is more common in China. Since the larger battery can deliver more power, the maximum power here is 350 kW, the range increases to 489 NEDC kilometres – the highest of all Taycan derivatives to date. The nominal output is 240 and 280 kW respectively. The rear engine also uses a two-speed transmission.

In the basic model, the 22 kW AC charger will also be available for the first time, but the amount of the surcharge has not been revealed – the 11 kW charger is still part of the standard equipment. It is also still unclear when exactly this option will be available for the other versions of the Taycan available in Europe. When asked by electrive, a spokesperson stated that the 22 kW charger will be used “at a later date” with all other derivatives.

The basic Taycan comes with 19-inch aero rims ex-works, but 20 and 21-inch rims are also available for an additional charge. Steel springs are standard for the chassis, air suspension is available as an option.

Whether the new basic version of the Taycan will also be offered in Europe and/or the USA at a later date is still unclear. If one takes the price difference of 23 per cent compared to the Taycan 4S (starting at 105,607 euros) as a basic version, a basic Taycan could be in the list in Europe at prices starting at around 82,000 euros.

The new basic model for China comes as no surprise. In April, Porsche’s Chief Development Officer Michael Steiner announced the entry-level version in an interview. He said that it was intended in particular for markets “that do not require four-wheel drive”. Even back then, Steiner had already cited the Chinese market as an example.

At the premiere of the Taycan in September 2019, Porsche had only presented the two top versions Turbo and Turbo S. Both have a 93.4 kWh battery (gross, 83.7 kWh net). The vehicles reach a power of 460 kW, in overboost the Turbo manages 500 kW for a short time, the Turbo S 560 kW. The Taycan 4S announced in October has an output of 320 kW and 390 kW in Overboost – if the customer orders the large battery for the 4S instead of the standard 79.2 kWh battery, the output in Overboost will be 420 kW. The maximum charging capacity of the large battery is 270 kW, that of the standard battery with 79.2 kWh gross (71.0 kWh net) 225 kW.

Byton may be facing bankruptcy