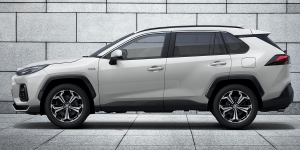 Suzuki presented the new Across, an SUV with plug-in hybrid drive, scheduled to go on sale in Europe this autumn. It is the first product of the partnership with Toyota and is essentially the Suzuki offshoot of the Toyota RAV4 PHEV with minor optical modifications.

The PHEV four-wheel drive of the Suzuki Across combines a 2.5-litre petrol engine (136 kW) with two electric motors, which produce 134 kW (front) and 40 kW (rear) respectively, and an 18.1 kWh battery, which should allow 75 kilometres of electric range. The Toyota-based SUV will be the Japanese brand’s first plug-in hybrid. Technical changes to the drive system have not been revealed, although Suzuki specifies an electric range of 75 kilometres, while Toyota only talks about 65 kilometres in the RAV4. However, Suzuki does not indicate in which test cycle this value was determined.

The two models also share considerable visual similarities: for cost reasons, Suzuki has only changed the front bumpers and the headlights. At the rear and on the sheet metal parts, the Across corresponds 1:1 to the technology donor RAV4 – except for the brand logo.

The interior looks similar: On the steering wheel, the Toyota emblem has been replaced by the Suzuki emblem, and the graphics in the digital instrument cluster have been slightly changed. Otherwise, the Suzuki corresponds to the Toyota SUV.

Suzuki has not disclosed whether the company will also bring further offshoots of the Across with other motorisations onto the market. The RAV4 is also available as a full hybrid. This leads to the suspicion that the Across is primarily a compliance model, which should help Suzuki to reduce fleet emissions.

Prices have also not been revealed. In view of the system output of 225 kW and the relatively large battery, the German website Autonotizen assumes just under 50,000 euros. Suzuki says that sales are set to start in autumn this year in Europe.