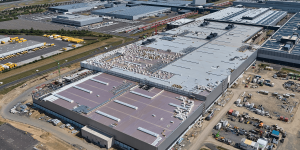 The conversion of the Porsche plant in Leipzig for the production of the third generation of the now also electric Macan is on schedule despite the Corona crisis. The new body shop for Porsche’s latest e-SUV has now been completed from the outside.

The next step is to set up the plant inside the building. Although the topping-out ceremony for the new facility planned for early July had to be cancelled due to corona restrictions, outside construction work on the body shop hall could be completed on schedule.

According to Porsche, the company was investing around 600 million euros in the conversion of the Leipzig plant and spent the majority of this budget on the new body shop. The foundation stone for the 75,000 square meter hall was laid in March 2019. “Since the initial ground-breaking ceremony in February 2000, we have invested more than 1.3 billion euro to develop the plant,” says Porsche’s Board Member for Production Albrecht Reimold. “This expansion project to enable (the) production of purely electric vehicles will ensure that the plant is ready for the future.”

Leipzig’s mayor Burkhard Jung visited the site last Friday and was shown the latest developments. “Porsche in Leipzig has evolved from an assembly plant to a technology driver for the entire European automotive industry. The milestones for developing the drive technologies of the future are being set right here in Leipzig,” he noted.

Porsche will launch the third generation of the Macan as an electric car. As plant manager Gerd Rupp announced on the occasion of the completion of the body shop, the corresponding training courses for the employees are already starting now – about two years before the start of production. “Our employees have years of experience in dealing with alternative drive types. They can’t wait to start working on electric vehicles in addition to our hybrid models,” he says. In addition to the second generation Macan, Porsche is building the Panamera sedan including two PHEV versions at the Leipzig plant.

Not only will the E-Macan body construction change, but the final assembly will also be adapted shortly. During the summer break that begins mid-July, Porsche will convert the production line to accommodate three different types of drive on one line – petrol, hybrid and purely electric vehicles. According to Porsche, the plant should then be able to build electric cars by the end of 2020. Porsche says that the new set up at the Leipzig plant should enable “maximum flexibility.” The VW subsidiary is still leaving it open as to exactly when the production of the E-Macan will start.

Hyundai to bring out Santa Fe PHEV in 2021

Registrations of e-cars in Sweden at about 25%