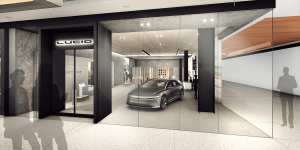 Earlier this year, Lucid Motors announced details of its sales and service strategy and nine Lucid Studios showroom locations in the USA. The first showroom has already opened at the company’s headquarters in Newark, California. Eight more showrooms were announced for New York City, Miami and West Palm Beach in Florida and several in California such as Beverly Hills, Santa Clara and in and around Los Angeles. Now Lucid Motors will open these Studios and Service Centers “most immediately” as the company announces among others, including the DC Metro Studio located at Tysons Corner Center in Tysons, VA.

Although everything can be wrapped up online with Lucid’s direct-to-consumer model, the idea of the Studios is for customers to have the option to visit a Studio in person. This model has of course been championed by Tesla first and is also copied by Polestar.

For Lucid, they say the “designed Lucid Studios to be engaging, to start conversations and to help educate people about the performance and efficiency benchmarks possible in an electric vehicle,” said Peter Rawlinson, CEO and CTO, Lucid Motors. “A Lucid Studio is a place for people to learn about our unique brand while supporting every facet of the customer journey.”

Notable about Lucid’s first electric car is that the company will equip the production version of the Lucid Air with a 900-volt system. So far, Porsche was the only one sporting an 800-volt architecture in the Taycan from the start.

Audi brings PHEV version of the A7 to the USA