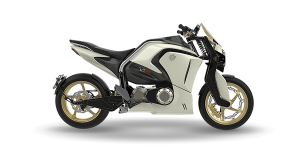 The Giaguaro motorbikes, the V1R, V1S and V1 Gara, are futuristically drawn mixtures of a naked bike and a sculpted body. The V1 Gara sports a more powerful motor, but shares the same three-speed gearbox and aluminium girder fork with its less pricey siblings.

Some of the points in the design are said to have been inspired by the old Soriano motorcycles from the 1940s – such as the aluminium support fork, which is said to have influenced the design of the Giaguaro (“Jaguar” in Italian).

With all three versions, engine and battery are covered on the sides, while the V1S has a small fairing around the cockpit. The design of the headlights, the suspension fork and last but not least the disc brakes mounted on the rims give the V1S an individual appearance.

Depending on the variant, the electric motor is said to have an output of between 60 and 75 kW, which in the basic V1R variant is supposed to ensure acceleration from a standstill to 100 kph in 4.4 seconds. In the top model V1 Gara, this should be 3.5 seconds, which is on the level of the well-known Zero SR /F.

Soriano gives the capacity of the battery as 15 to 20 kWh, and the range for all models is to be between 120 and 160 kilometres although the company does not specify in which test cycle the measurements were taken or how this range is achieved. There is also no information on the charging system as yet.

As mentioned above, all three versions are to have a three-speed gearbox. This is obviously for different reasons than a combustion engine motorcycle – the first gear should provide the optimum torque at lower speeds and should also be able to be used as a motor brake when decelerating. The second gear is intended for city driving, the third gear as an overdrive for long distances to reduce fuel consumption.

“Soriano Motori’s motorcycles represent the finest Italian design, image, branding, architecture and engineering, that for the first time are being applied to EV motorcycles for the next generation of riders,” said Marco Soriano, founder of SMC. “Owners of Soriano Motori motorcycles have assured the look, feel and lifestyle of what they love about motorcycles, fused with the intoxication of a strong and proud made in Italy brand. We bring elegance and innovation into balance to deliver something that is transcendent for the motorcycle culture.”

The electric motorbikes V1R, V1S and V1 Gara can now be pre-ordered and will cost at least 25,500 euros (V1R). The V1S should cost 30,500 euros, the top model is in the configurator at 32,500 euros. According to Cycleworld, the series version is to be presented in November.