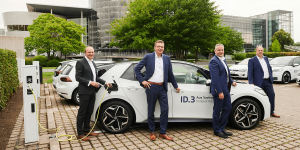 Volkswagen’s so-called Transparent Factory in Dresden has expanded its car park charging infrastructure with 32 additional charging stations. The facility and showcase visitor centre now has 64 charging stations in operation, 36 of which are open to the public.

Volkswagen describes the charging park at the Dresden production facility as one of the largest in Saxony. Reinhard de Vries, Managing Director of Volkswagen Saxony, hopes that other companies in Saxony will follow their example.

The car company has long converted the showcase factory in Dresden into an electric powerhouse. The e-Golf has been rolling off the assembly line there since 2017 with the ID.3 to come in 2021. The first charge of VW’s first MEB electric car is currently being made in Zwickau, about a 120 kilometres away from Dresden. To secure jobs outside production, Dresden is to become a critical delivery hub for electric vehicles, especially as the Dresden location forms the border tripoint of Poland, the Czech Republic and Germany. Currently, about 380 employees hand over 1,300 cars per year. This number is to be “significantly increased,” according to VW. Only recently, They also launched its first ID. Store in Saxony’s picturesque city.

Besides, Volkswagen now wants to transform the Transparent Factory into the ‘Centre of Future Mobility’. In other words: VW wants to develop and test innovative technologies there together with partners from industry and start-ups as reported.