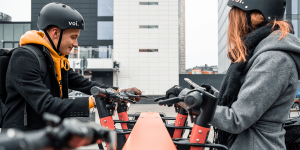 Sweden’s Voi Technology is on track to make an annual profit in 2021 after breaking even in June. It is the first big electric scooter sharing firm to do so, the company said this week. The announcement comes at a time in which the market has been hit hard.

Corona has proven a double-edged sword for Voi – first, it cut off all scooter sharing but is now swinging back with usage picking up as people seek individual transport alternatives. Voi also speaks of a “paradigm shift” following the Covid-19 lock-downs. “The regulatory environment in many countries has improved significantly, and decision-makers are embracing new modes of transportation,” the company states. Voi is already active in 40 cities and eleven countries with most markets having reopened.

June is the first month in which the company founded in 2018 has turned a profit and Voi is aiming to make its first full-year profit in 2021. The Swedes consider the introduction of the Voiager V3X, an e-scooter with swappable batteries key to the recent success. The roll-out of the new model designed in-house has reduced daily charging times, logistics and maintenance cost per scooter by more than 50 per cent, Voi reports. Besides, the new scooters are more competitive so that the firm may “break-even at lower prices and lower utilization levels,” says Mathias Hermansson, CFO and Deputy CEO of Voi Technology.

On the back of the news, the company has raised $30 million to fund expansion into new markets including the United Kingdom, which Voi sees as “potentially Europe’s biggest yet”. Britain decided to fast-track planned e-scooter trials earlier this month, now asking councils nationwide to test proposed legislation as reported. Voi expects to get necessary licenses within weeks and is preparing to kick-off shortly, according to press information.

The new funding from new and existing investors, led by VNV Global VNV.ST takes the Swedish company’s total funding to $165 million since 2018. Hermansson added the company was also looking at overseas expansion, namely New York, in an interview with Reuters.

Another part of Voi’s strategy is to work closely with cities, especially after initial large roll-outs of competitors had municipalities become weary, CEO Fredrik Hjelm explained in a presentation earlier this year. Voi for example operates park zones for the e-scooters in some locations, thus enabling orderly fleet management. At the same time, they improved operating efficiency by investing in digital infrastructures, such as machine learning techniques. The company also launched a resale programme for refurbished scooters and claims that to date over 10,000 scooters have been sold.

Still, the start-up’s success appears impressive against the backdrop of tight consolidation in the micromobility market. The increasing competition combined with the sharp halt of operations during lockdown worldwide had led to mighty mergers. Voi competitor Lime managed to convince Uber and Google’s alphabet to lead a financing round over $170 million in May to take over Jump. At the same time, Lime saw a 79 per cent drop from its previous valuation and is now valued at about $510 million. Lime had pulled its fleet of electric kick scooters from 99 per cent of its markets worldwide when the pandemic took hold as reported. As a result, the company has now laid-off 13 per cent of its global staff, not counting numerous contractors.

While Voi of course also says that it has been “a tough first half to the year,” they consider the monthly profits “a huge milestone not only for us but for the entire industry which has attracted much scepticism in the last year”.