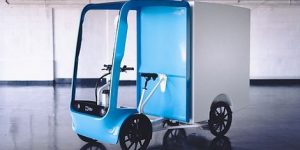 The new vehicle is the second generation of the EAVan, a pedelec delivery vehicle launched in 2019. According to EAV, it is based on a new platform that is to be used in future as the backbone for diversifying the product range. The 2Cubed fills the gap between traditional cargo bicycles and vans, but is more of a van-oriented vehicle, says the British company. They have now presented the model online. The launch video can be seen in this article below.

The Startup EAV, founded in 2018, calls itself a micro-mobility company. With the second platform, the manufacturer wants to start series production. According to the manufacturer, the 2Cubed is already being manufactured in the British EAV production facility in Upper Heyford, near Oxford. Several customer trials are already underway or about to start in Europe and North America. In addition, EAV has indicated that it is in talks on a “major international sales agreement”.

The British company hardly mentions any technical data. The maximum payload of the 2Cubed is currently said to be 150 kilograms excluding the driver, but a new wheel and tire package will soon be introduced to provide a higher load capacity. Apart from that, the new model will be based on the entire feedback on the EAVan. The debut BEVs were too complex for series production, says Adam Barmby, CEO and founder of EAV. The most striking innovation is that the second generation is now based on a chassis with a separate body. In the cargo version, the latter consists of the aforementioned two-cubic-metre box, but other bodies are also planned.

Since EAV does not provide any explicit information on the propulsion system, we take a brief look back at the management information on the British debut model: The EAVan can accelerate up to 5 km/h by itself with a small thumb throttle, similar to the ones on the electric kick scooters. Afterwards, the rider has to pedal, where they are supported by the electric motor up to 25 kph, which is typical for e-bikes. In freewheel mode, the drive should even be able to recuperate power from the battery. The range is specified by EAV as up to 96 kilometers if the optional batteries on the roof are ordered – otherwise it is 48 kilometers. The batteries are replaceable, but can also be charged at a household socket.

According to Adam Barmby, the 2Cubed can replace most vans and even cars in urban environments. “without any loss in business operational efficiency or discomfort to the operator or driver.”