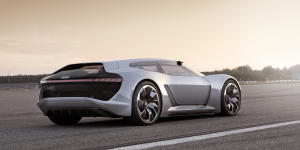 The new Audi chairman Markus Duesmann has apparently put a number of combustion engine models in question as part of a review of the product strategy. The goal is to reduce costs, he said.

As Autocar reports citing a source close to Duesmann, the Audi TT and Audi R8 sports cars may be replaced by purely electric successors. There have been repeated reports about the withdrawal of the two models that have never been confirmed one way or another. Things may be different this time with Duesmann as a new addition from outside.

This seems to be the gist of what was also confirmed by the source quoted by Autocar: “Cars like the TT and R8 were reviewed as part of a general cost-cutting process in the past. However, they have now come under increased focus.” Sounds like it could be really serious this time.

While Audi has already shown the concept of a more expensive electric sports car that could replace the R8 with the PB18 e-tron it is still unclear how Audi envisions an electric TT. A switch to the MEB platform seems possible given the size and positioning of the current TT. As yet, the carmaker has not confirmed the information.

During the virtual presentation of the Q4 e-tron Sportback Concept at the beginning of July, Duesmann already announced that they were looking at “further SUV concepts in the C and D segments” for future electric vehicle models. Duesmann also described an electric convertible as conceivable, but made no mention of sports cars.

There could also be changes in combustion engine models with a larger volume than the two sports cars. While Audi can fall back on the VW Group’s Modular Transverse Building Kit (MQB) for the smaller models at quite a reasonable price, the brand bears most of the development costs for the Modular Longitudinal Building Kit (MLB) alone – i.e. the basis for models from the A4 and Q5 upwards. According to the report, it is conceivable that the MLB could in future be “systematically paired” with the MSB platform developed by Porsche (Panamera and Bentley Continental GT).