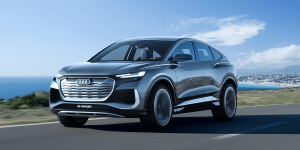 Audi has now presented a near-production study with the Q4 Sportback e-tron concept, turning the compact electric SUV into a four-door SUV coupe. Series production is already scheduled: The Q4 e-tron Sportback will to be the seventh electric Audi and should hit markets in 2021.

In technical terms, the Sportback corresponds precisely to the Q4 e-tron that Audi presented as a concept study at the Geneva Motor Show in March 2019. Both models use the 225 kW version of the Volkswagen’s MEB platform, i.e. a 150 kW drive in the rear and a second 75 kW motor on the front axle. Audi specifies 6.3 seconds for the sprint from zero to 100 kph, and the top speed is limited to 180 kph.

As for the battery, Audi gives a capacity of 82 kWh, which corresponds to 77 kWh net – i.e. the largest battery option available in the VW ID.3. The range should be more than 450 kilometres according to WLTP, later versions with the rear-wheel-drive should reach more than 500 kilometres. VW targets the same value for the SUV ID.4, while WLTP certifies the ID.3 with this battery and 150 kW rear drive a range of 550 kilometres.

There are no surprises when it comes to the charging system: Like the ID.3 with the largest battery, the Q4 e-tron Sportback charges with a maximum of 125 kW DC. A charging process should take less than 30 minutes to reach a charge level of 80 per cent. Audi has not yet revealed information on AC charging capacity.

What is clear, however, is that Audi makes full use of the MEB’s features in its design. Once the technology platform with battery, drive units and the chassis tailored to Audi has been configured, different bodies (in VW’s language “hats”) can be mounted on this basis – theoretically only at low additional cost. The Sportback is thus intended to give potential Q4 customers the choice of which body shape is more suitable for them with the same technology.

In terms of width (1.90 metres) and wheelbase (2.77 metres), both versions are the same. With an external length of 4.60 metres, the Sportback is one centimetre more elongated, and with a height of 1.60 metres, it is just a centimetre flatter. From the B-pillar upwards, the roof is somewhat flatter, and the D-pillar is strongly inclined, typical for the Sportback. Nevertheless, the designers have designed the rear end differently from the e-tron Sportback. For example, the roofline ends quite high in a spoiler that divides the rear window in two. What has its aerodynamic and design advantages, however, was already proved to be impractical on earlier Prius models, which also had a split rear window, since the integrated spoiler severely restricts the view to the rear.

Otherwise, the Sportback relies on familiar design elements of the Q4 e-tron, such as the strong emphasis on the side skirts around the wheel arches or the newly designed single frame at the front that forms a structured and closed surface instead of a classic radiator grille.

Inside, the Q4 Sportback should score points with an interior that is generous considering its external dimensions. In contrast to the regular Q4, the Sportback has four seats with integrated headrests, and the Alcantara’s workmanship in Manufacture Quality is also highlighted – so the Sportback is more about comfort and design than utility value. The German carmaker makes no mention of the luggage compartment volume.

At the online premiere of the Q4 Sportback e-tron concept, Audi’s new boss Markus Duesmann described the company’s electrical strategy as “robust,” but they want to “convince more people of the merits of an electric car. Duesmann hinted that further SUV concepts in the C and D segments would be considered although two words – Avant or station wagon – were not uttered.

Duesmann hopes that the Artemis project he initiated will provide an impetus for the entire Group. The project should put a new electric car – possibly called the A9 e-tron – on wheels outside Audi’s established development department. “It’s not about the project itself, but about the technology that will result from it for the customer,” says the Audi boss. “I am sure that this will soon pay off for the customer.”

Registrations of e-cars in Sweden at about 25%