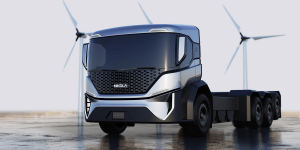 Nikola Motor has received an order from Republic Services, the second-largest waste disposal company in the USA, for at least 2,500 battery-powered refuse collection vehicles, with an option for 2,500 more.

The BEV refuse trucks, appropriately named Nikola Refuse, are to be equipped with the drive train from the Nikola Tre. The plan is to start road tests at the beginning of 2022 and to start full production shortly afterwards with delivery in 2023.

The Nikola Tre is based on the Iveco S-Way and is primarily intended for urban use in Europe. The Tre is built at Iveco in Ulm, Germany. Nikola has said that this is the largest single order from the American waste management industry.

Nikola CEO Mark Russell also sees the Refuse as a “game-changer” – also because of the peculiarities of the American market. “Refuse truck customers have always ordered chassis from truck OEMs and bodies from other suppliers,” Russell says. “Nikola has fully integrated the chassis and body, covering both with a single factory warranty.”

The modular battery system of the Nikola Tre is supposed to enable up to 720 kWh, which is what the manufacturer also states this for the Refuse model. However, the range here is only stated as up to 240 kilometres, with the Tre up to 400 kilometres were mentioned. With the more special use as a garbage truck, the driving profile and the vehicle weight including payload can be estimated better than with an electric tractor with a wide range of applications.


According to earlier information, Tre’s electric drive was to be designed for a continuous output of 480 kW. Nikola says that the power of the e-drive should be limited by software to 1,000 hp, i.e. 735.5 kW. If this is the peak power that can be called up briefly, the continuous power could actually be 480 kW. According to earlier statements, maximum turning momentum should be 1.800 Newton-metres.

The electric Refuse truck should have a range of to 150 miles (240 km) of range and up to 720 kWh battery. Nikola says that the vehicle should be able to empty up to 1,200 dustbins during per battery charge. The Refuse trucks should be charged overnight at the depot.

According to Nikola founder Trevor Milton, “The Nikola Tre powertrain is ideal for the refuse market as it shares and uses the same batteries, controls, inverters and e-axle. By sharing the Tre platform, we can drive the cost down for both programs by using the same parts,” Milton says.

In terms of its emission-producing competitors, Nikola says that the new platform can give refuse trucks “nearly three-times the HP of natural gas and diesel options, giving operators the ability to go up hills with full loads without issue” something that natural gas vehicle manufacturers have apparently been working to solve.

Republic Services has set itself the goal of reducing greenhouse gas emissions by 35 per cent in the long term and is, therefore, investing in the renewal of its fleet. The company also hopes that the e-vehicles will offer well-known advantages such as quiet and locally emission-free operation, improved driving behaviour with the immediately available torque and regenerative braking, as well as lower maintenance costs.